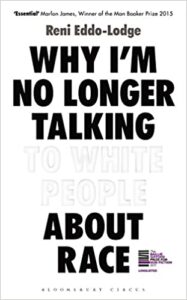 Eddo-Lodge’s book has helped me to understand the white privilege I’ve unconsciously benefited from throughout my life: the racist structures of society in business, education and culture that favour white people and exclude black people except for a token few. Although I have stood up against racism since I was a teenager, I can see that I derive advantages from the institutionally racist system.

I’m white, but I identify as ‘white other’ on all those ethnicity forms. As a young child, moving away from the security of the North London Jewish community to almost exclusively white British Sussex, I definitely felt ‘other’. Changing my given name Rachel to my non-Jewish name Catherine helped, but my black curly hair and Semitic looks constantly elicited questions: ‘Where are you from?’ . . . ‘No, I mean, where are you from originally?’ My cultural background was completely ignored throughout my education. We only learnt about Christianity and sang hymns in assembly every day.

Rise of the NF

In the 1970s, we saw the rise of the fascist National Front. I remember seeing a swastika daubed on my school and hearing about the organisation of 24-hour protection around the synagogues. I joined the Anti-Nazi League, went on marches and I began to study the history of imperialism and racism.

But I didn’t suffer from racism personally. I self-identified as ‘other’ and felt solidarity with black people, yet I never suffered from the prejudice Reni Eddo-Lodge describes in her book. I didn’t endure continual judgement based purely on skin colour at work, on the street, in social situations, all day, every day.

It was moving to read Eddo-Lodge’s descriptions of talking to white people who believe their world experiences are universal. ‘They’ve never had to think about what it means, in power terms, to be white.’[1] And she found they didn’t want to listen to her, denied there was even a problem and shut her down. As for many white people, this book has helped me to question my own ideas and behaviour.

This is the message I’ve taken from Eddo-Lodge. All of us who see ourselves as anti-racist ‘white allies’ need to appreciate that we have benefited from the racism we seek to eliminate. And we should always listen to black people when they tell it like it is. We can never know what it’s like to endure racism – and they do.

This site uses Akismet to reduce spam. Learn how your comment data is processed.